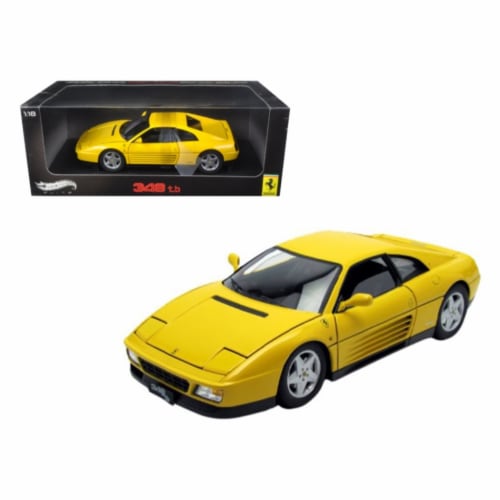 Brand new 1:18 scale diecast model car of 1989 Ferrari 348 TB Yellow Elite Edition die cast car model by Hotwheels.
Limited Edition 1 of 5000 Produced Worldwide.
The Ferrari 348 TB made its debut at the 1989 Frankfurt Auto Show. With its high standard of build quality along with exceptional performance, the 2-seat sports car quickly became very popular. Like most of the Ferrari models, the body was designed by Pininfarina, the styling was a development of the 328 with a strong similarity to the five-year-old Testarossa. The real changes were found under the body, where a 3.4 litre 8-cylinder engine was installed longitudinally. A five-speed gearbox was directly mounted at the rear of the engine transversely. These changes are well reflected in the 348 TB type indication, with the "348" referring to the 3.4 liter V8 engine and the "T" to the gearbox. Like its predecessor, the 348 was available as a berlinetta. Don't miss this fantastic die-cast model!
Has steerable wheels.
Brand newbox.
Rubber tires.
Has opening hood, doors and trunk.
Made of diecast with some plastic parts.
Detailed interior, exterior, engine compartment.
Dimensions approximately L-10, W-4, H-3.5 inches.