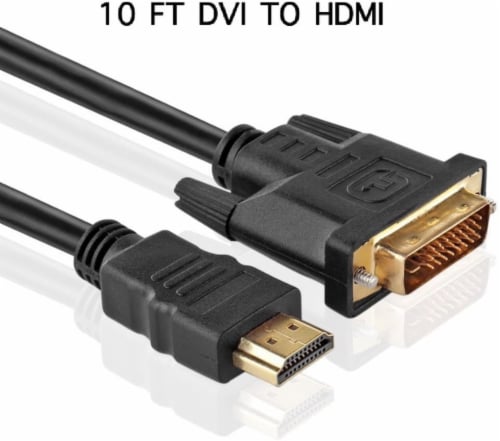 SANOXY HDMI to DVI Cable Bi Directional DVI-D Male to HDMI Male High Speed Adapter Cable Support 1080P This cable connects DVI devices to HDMI devices such as DVD, satellite boxes, LCD, projectors, plasma and HDTV. HDMI provides an interface between any HDMI-enabled source, such as a set-top box, DVD player, and A/V receiver, video monitor, and projector for Video only. The cable will even connect HDMI-equipped devices like PlayStation 4, Xbox 360 or Blu-Ray to a DVI-equipped monitor or TV. Bi-directional Cable - Transfer signal from HDMI to DVI and also from DVI to HDMI, connecting from an HDMI equipped source to a monitor with DVI input or from a computer with DVI to an HDTV or monitor. Connect to a Large Screen at Home or Office with HDMI to DVI Cable Designed for high performance data applications, Cmple HDMI to DVI cable provide a superior solution for connecting today’s advanced video hardware such as HDTV/satellite receiver, plasma TV, LCD TV or monitor, DVD player, projector Supports up to a 1080p resolution with HDMI input. You’ll get the max performance out of your devices.